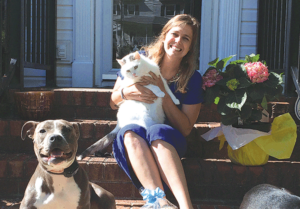 ABOVE: Ashley Unger is pictured with some of her pets.

“Many men and women walk by us every day with scars from assault in their life,” said local artist and art teacher Ashley Unger. With her enthusiasm, positivity and passion, few would believe she is among them.

“Many times, ‘I am going to kill you’ rang through my ears and into my mind, body and heart. I thought I would die more than once,” she said of an abusive relationship she survived. “This October will mark five years since I was reborn into the woman I am supposed to be.”

After a trial few would imagine she endured, Unger triumphed over fear, manipulation and abuse. “It’s like I see the world as my amusement park now,” she said.
But getting to that point wasn’t easy.

Many people might be familiar with one of the oldest methods for refining and purifying gold: fire. It seems appropriate, then, that Unger’s initials, AU, represent the precious metal on the periodic table, and that her art studio, Golden Bee, is so named.

During a teacher training activity in 2012 in a Virginia district where she taught, Unger met the man who would eventually become her fiance — and her abuser. “He was charming and handsome, and I was newly single and 22 years old in a completely new town. I had not met anyone yet and had no family nearby, so I was incredibly vulnerable,” she said. “The only thing I loved in the area where I was living were the mountains of Shenandoah National Park, so I welcomed the attention, love, and time spent with someone other than my cat.”

Unger described the relationship as moving “incredibly quickly.” Before she knew it, she had met her new boyfriend’s daughter from a previous marriage. The pair moved in together in January 2013 about five months after they met. In May 2013, on Unger’s 23rd birthday, “He walked me to the school room where we first met, got down on one knee, and we became engaged,” she said. “Then the mood changed.”

Prior to their engagement, “we had had a sweet relationship,” she said, “but within one week of our engagement, I was curled in a ball on the bathroom floor while my new fiance screamed at me from above.” She told herself this man had perhaps had a bad week at work. “There is no way I got engaged to a monster, right?”
Throughout that summer, the abuse escalated, as Unger’s fiance became convinced she was being unfaithful.

“I felt tricked into love with someone that wore a fabulous mask in the beginning of the relationship, but now was someone who scared me, threatened my life and hurt my dog,” she said. But when school began again that fall, they were still together. Unger worked hard to hide the nature of her abusive relationship, unsure of how to get out of it. The biggest question she kept asking herself was: “How did this happen to me? I am the ‘gypsy soul’ that loves music and animals and looks at the world with love and kindness. How?”

One night in October 2013, Unger found herself “cornered against my dog’s crate, my fiance screaming, red-faced, in my face. I have never been more afraid to be alive and to die at the same time,” she said. “After about three hours of verbal and physical abuse, my fiance stood in my doorway, watching me while I pretended to sleep; not moving, not making a sound,” Unger said.

She said he then had sexual relations with her as she continued to feign sleep. No rape charges were filed; her appointed lawyer told her not to file them because they wouldn’t hold up in court, Unger said, adding that no rape kit was done.

“The next morning, I found out a senior art student I was teaching had died overnight in a car accident,” she said. The events of the night before, coupled with this news, developed into a realization: “How incredibly precious and quick this life is, isn’t it? Everything clicked into place as I sat across from a mourning mother who had lost her child. There was no way I would lose myself, my soul, to a hurt human who didn’t value my worth,” Unger said.

But the relationship wasn’t an easy one to end. Her former fiance composed an email about her personal life and sent it to the entire staff at the school where she worked, Unger said. He left unwanted roses on her doorstep and screamed and made a scene the day he moved out.

She provided evidence that her ex-boyfriend was convicted of misdemeanor domestic assault and given a one-year deferred sentence and one year of probation. She also obtained a two-year protective order against him.

Although she was finally rid of the source of her abuse, “the struggle had only begun,” Unger said. “The terrifying part of coming out of an abusive relationship is the way you feel about yourself. I had no confidence, I was suicidal at times and I was struggling with PTSD.”

Over the course of the coming months and years, Unger sought therapy, wrote in a journal, listened to music and painted as ways to cope with her experience.

While some feel the term “victim” disenfranchises someone who has lived through abuse, Unger sees it differently. “I do not find shame in being called a ‘victim,’ because I did not ask to be assaulted. I was not volunteering my heart and soul to be torn to pieces.” In her mind, an unwillingness to acknowledge one’s victimization “gives the abuser authority to hint that I wanted to be treated like this, and that is simply not the case.”

For Unger, the terms “victim” and “survivor” are not mutually exclusive. “I am a survivor of domestic violence because I came out alive, and not every man or woman does,” she said. “I still attend therapy. I am still surviving this.”

And Unger has powerful advice for others who may be experiencing abuse: “Get out alive.” She explained people can be happy again, though “there is no end-date to when the trauma of abuse ends.” Still, “you have to be alive to move forward and live your life.”

Unger is now married to a fellow teacher, Michael Blankenbecler.

“I don’t think our scars are meant to bring us shame,” she said. “They are a reminder of what it means to survive something bigger than we expected from this life.”