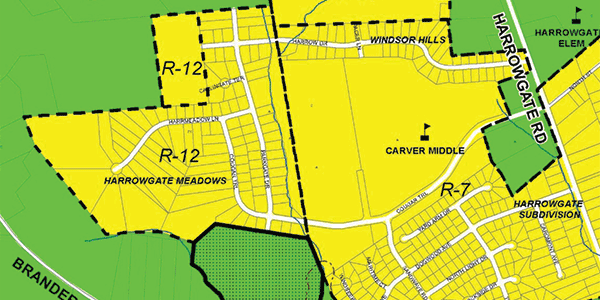 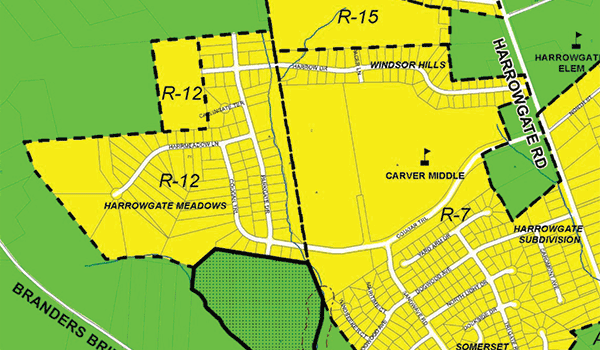 front933
The Chesterfield County Planning Commission last week cleared the way for a new Harrowgate Elementary School and a revamp of Harrowgate Community Park. The...

The Chesterfield County Planning Commission last week cleared the way for a new Harrowgate Elementary School and a revamp of Harrowgate Community Park.

The unanimous votes – which said the projects are in “substantial accord” with the Comprehensive Plan – took place during the commission’s July 17 meeting.
The new 782-student Harrowgate School will replace the current 760-student school located at 15501 Harrowgate Road, which was built in 1960.

Harrowgate Park will be split and located north and southwest of the new Harrowgate School. Fields and courts will remain at the northern location, which will be served by a new access road from Harrow Drive.

County Planner Steve Haasch said the new park will pick up an additional 4 acres, expanding from 35 to 39 acres. He said the combined school-park complex will provide a “synergy” with minimum impact on area properties.

County Parks employee Stuart Connock said the complex will be better for the citizens and the parks system, adding that the revamped park should have greater utilization.

Two neighbors spoke during public comment. A woman who lives at Harrowgate Meadows expressed concern about noise and traffic and noted that the U.S. Army Corps of Engineers said there wouldn’t be any development in the area because of wetlands.

A man expressed concern about the wetlands and flooding.

County Environmental Engineering employee Becky Ward said the Army Corps of Engineers would have to give approval prior to any land disturbance. The federal agency would also conduct a public hearing. Ward said the wetlands would remain unaffected by the projects.

The land in question does not exist in a 100-year floodplain, according to the staff report. A creek on the western edge of the property at 4100 Cougar Trail drains into existing culverts under the road to a tributary in Timsbury Creek. An on-site retention pond could be built to help with drainage. The properties are located within the Lower Swift Creek Watershed.