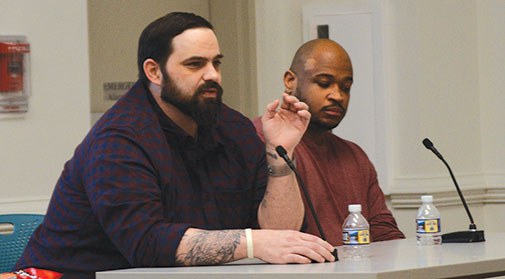 Wilkerson noted that HARP has had more than 800 participants and 70 graduates since Sheriff Karl Leonard started it in March 2016. Nonetheless,

“We don’t want a HARP program in our jail. It’s not the place for it,” he said. “It’s everyone’s problem. It’s going to take multiple parties coming to the table (to fix it).”

All three HARP enrollees lauded the program, which uses a peer-to-peer method in order to hold enrollees accountable.

“It takes at least six months,” enrollee Jodi Gayan said. “This program is so unique. We govern ourselves. That’s why it works. I’ve been in other (jail) programs, and the deputy … has no idea what’s going on.”

In Chesterfield’s jail, the “deputies treat us like people who made a mistake, not the scum of the earth,” she said, adding that the deputies were part of the problem in the last place where she was incarcerated.

“We try a lot of things,” Gayan said. “Not everything works. If not, we try something else.”

When one is ready to leave HARP and the jail, “[staff] make sure they know where you’re going,” she said, noting the county received a grant that pays for a bed for 30 days at a recovery house.

“We’re fortunate to be in a place with the HARP program,” enrollee Christopher Wimmer said. “It’s a big deal that we get these opportunities to come out here and talk to you tonight.”

“We see our sheriff three or four times a week,” he added. “I never saw someone above sergeant in other jails.”

“It was the first time in my life to embrace fellowship,” HARP enrollee Ruben Malpica said. “We learn about coping skills and what triggers us … you learn (good) behaviors that were absent in your life.”

Relating his personal story, Wimmer said his first criminal charge was for marijuana. “I went to college, was married, had children,” he said, noting that he was an industrial logger. “I hit my foot with my chainsaw and got hurt. My insurance was exhausted. It cost me my marriage and led to buying pills on the street. When pills weren’t available, I turned to heroin. Today, I’m incarcerated for the umpteenth time.”

Although he believes the benefits of legalizing marijuana outweigh the negatives, Wimmer said he’s undecided because he has children.

“It was a gateway drug for me,” Malpica said. “Years later, I experimented with other drugs.”

Gayan said she’s “scared for what the long-term effects (of legalization) would be.”

Citing other states that have legalized marijuana in recent years, Marks said he would legalize marijuana for those 25 and older and “tax the heck out of it,” with the proceeds going to fund education.

Marks – who is battling Lindsey Dougherty for the Democrat nomination in House District 62, with the winner set to face Republican Carrie Coyner in November to replace retiring Del. Riley Ingram, R-Hopewell – said the county needs more recovery homes for those addicted to drugs.

“Why does an individual need to be incarcerated to get the help they need?” he asked.

Wilkerson said two such homes exist in the county, but Miles said they likely are violating the county zoning ordinance, which does not allow more than four unrelated people to live together. Consequently, the homes are “super quiet” about their locations, he said.

In her job, Battle said she started seeing the same people over and over again. “Arresting your way out of this is not going to do anything,” she said. “I’m happy the community is starting to work together to come up with resources to try to come up with a way to stop the cycle.”

Miles noted that the weight that each of the county’s six circuit court judges gives HARP enrollees differs at sentencing.

Although he noted some of the changes he’s made since taking office late last year, including “a targeted, nuanced policy” in regard to simple marijuana possession cases, Miles said lasting change has to come from the state Legislature. “It’s going to take substantially more courage to make it happen,” he said. “It’s going to take a critical mass.”

Marks cited the history of some of his family members, including an aunt who got hooked on crack when her boyfriend laced a cigarette with cocaine. “She smoked and got hooked. I’ve never seen her sober,” he said, adding that she uses alcohol or crack, is a prostitute and shoplifts. “She was a teen fashion model who ended up with the wrong guy,” he said.

Marks noted the “generational effect” the woman’s drug use had, as it affected her two children, including Marks’ cousin, who is incarcerated in a state prison.

Miles announced that his office helped start a pilot program working with a peer recovery narcotics services manager, Courtney Nunnally, who started last week. She is employed with a private nonprofit and is working with five local recovery service providers to coordinate services for drug users in the court system.

“As soon as we get results (after 90 days), I’m going to go to the county (to ask) for funding,” Miles said, adding that he could also seek grant funding. “This may be the most important thing I do this year.”

Miles, who was elected last November to fill the remaining 13 1/2 months of Billy Davenport’s term, will face Republican Stacey Davenport (no relation to Billy) on Nov. 5 for a full four-year term.