Walking is a virtual reality for Chester woman

front939
June Peat has been virtually walking for nearly 12 years, and she enjoys it. In the summer of 2007, Peat and her family took... 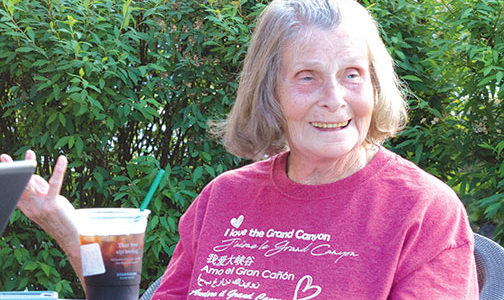 June Peat has been virtually walking for nearly 12 years, and she enjoys it.

In the summer of 2007, Peat and her family took their usual trip to Duck, N.C. “We were on the beach, and I looked so horrible in a bathing suit that I decided I needed to do something,” the 75-year-old said. That July, Peat began walking, and she hasn’t stopped.

After a while, she decided she need to go somewhere besides trails, which were becoming familiar. First, she walked to Richmond, then to D.C. — but not literally. Peat would set her sights on a city, and her husband, David, would use Google Maps to plan a route. She would set out on the Government Trail, the Big Poplar Trail at Pocahontas State Park, the river walk at Roslyn Landing in Colonial Heights or another familiar pathway, and walk a set number of miles each day until she had “arrived” at her destination. “We always had a goal, with me walking and my husband tracking my miles,” she said.

Peat recorded her walks on a calendar. “Each day I would mark how far I went, and my husband would put my mileage into a spreadsheet he created.”

In 2008, at age 65, Peat retired from her position at Lucy Corr, and her virtual walking goals became more ambitious. Her third destination was the Field of Dreams “because it’s my favorite movie and I love Kevin Costner,” she said.

Her husband mapped the route to Dubuque County, Iowa, a roughly 1,000-mile journey. “Having my husband track it was motivational,” she said. “After I went to Field of Dreams, I walked to Lansing, Iowa. I went from there to Kansas City.”

She didn’t stop in Kansas City. At one point, her daughter, Robin Martin, and her grandson were studying Alaska’s Iditarod Trail. “So,” Peat said, “I did the Iditarod next.”

With her husband planning her routes and tracking her progress, and her children and grandchildren inspiring destinations, Peat’s walking has become a family affair. Even her 16-year-old “mini doxie,” Honey, participates. When Honey was younger, “she used to go walking with me every day,” Peat said. A bit older now, Honey still accompanies Peat on most of her walks. “She rides in a carriage now and I bring a little dish of water for her,” Peat said.

Peat is an all-weather walker. Over the last 11 years, she said she has missed walks on only approximately 10 days due to weather. “I walk in snow, rain—and people really do think I’m nuts,” Peat said. On hot days, Peat walks early in the morning, and if for some reason weather does preclude her walk, “I make the mileage up the next day,” Peat said. Peat’s husband tracks her walk using a live app, “and if it’s stormy, he’ll go out in the car and pick her up,” Martin said.

Peat and her husband have been married 56 years. “He did the Monument 10K with me one year,” Peat said. “He didn’t train like I do, and when we got to the turnaround, he had blisters on his feet and never did it again.” Although Peat’s husband does not join her on her walks, he supports her in spirit through his record-keeping. At the end of 2007, Peat’s first year of walking, during which she lost 35 pounds, “my husband made a certificate for me that said I had walked 500 miles.”

Achieving that milestone was motivating for Peat, who cherishes a few other achievements. “My favorite virtual walk has been the Grand Canyon, because I have been there in real life too,” she said. One of her proudest moments was Paris, France. She visited the world-renowned city in reality twice, “and I walked there every day before I did it virtually. I loved Paris,” she said.

Peat has also walked through Russia. “I was in Russia forever—years,” Peat said. During that virtual trek, her husband modified her route to allow her to “visit” her son, David Jr., who was in Kazakhstan. “He was telling all the students about my visit, and they asked one day, ‘When is your mother gonna come?’ They didn’t understand it was virtual,” Peat said with a laugh.

She will be 76 in June, but doesn’t show signs of slowing down any time soon.

“She does the June Peat shuffle,” Martin said. Her feet don’t really leave the ground.” Currently, Peat is en route from Paris to London, and she already knows where she wants to walk after that.

Recently, she read an article in the Village News about “a trail from Canada to Lake Margaret and Pocahontas State Park. That’s what I want to do next.

My grandparents lived in Nova Scotia, so I want to go there,” Peat said. “I think it would be really exciting to do that route.”