front933
Although he says the Chesterfield County Sheriff’s Office is known for its Heroin Addiction Recovery Program, Sheriff Karl Leonard said the office can’t be... 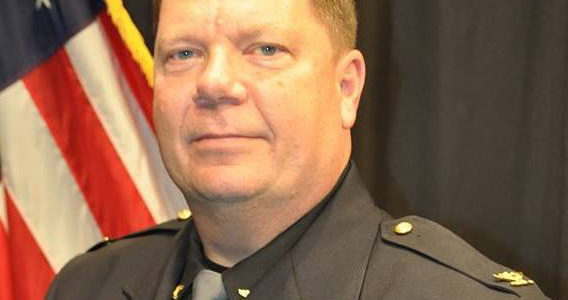 Although he says the Chesterfield County Sheriff’s Office is known for its Heroin Addiction Recovery Program, Sheriff Karl Leonard said the office can’t be defined by it.

He mentioned several programs that benefit the inmate population, including some he’s implemented since being appointed sheriff in February 2014.

The jail has work training programs – including forklift operation and food service – and a re-entry program that helps make sure inmates have what they need to succeed when they are released. These have been a “huge plus in reducing our population and stopping the revolving door of recidivism,” Leonard said.

In addition, Leonard used his connections to get the sheriff’s office a K-9: Amor, a German Shepherd mix, has been working as an explosive detection dog in the county’s three court locations and the jail since December.

Some programs that Leonard and his staff have expanded include community and inmate outreach. Community outreach involves sheriff’s deputies working with the Chesterfield Food Bank and playing bingo with Lucy Corr residents once a month. Inmate outreach includes one or two inmates visiting schools weekly with a deputy to talk about life lessons.

A longtime Chesterfield County Police officer who retired from the department in 2011 after 30 years, Leonard also served full- and part-time for 31 years in the Coast Guard Reserve and retired in 2015.

Leonard, 60, has five daughters, who range in age from 25 to 35. Two are married and two are engaged. He said he wants to serve until his last daughter is married. “My plan is to go four years and run again in 2023,” he said.

For the first time since he was appointed, Leonard – who was elected in March 2014 and again in November 2015 – has a challenger. He faces independent Rahn Kersey on Nov. 5.

Leonard took issue with a couple of things Kersey said about the sheriff’s office in a recent Village News story.

Kersey said that Chesterfield sheriff’s office employees’ pay ranks 19 percent below the national average. Leonard said this is a misleading or false statistic from Indeed.com because it includes only 87 salaries that were submitted to the online company. There are thousands of sheriff’s offices, Leonard said. The starting pay for deputies has increased annually since he became sheriff, he said, noting that it was $35,198 in Fiscal Year 2014 and is now $42,075 (FY 2020).

“We’re one of the highest paid sheriff’s offices in Virginia,” Leonard said, calling pay “one of the issues I’ve been working on since Day 1.”

In addition, he said he has added two steps within the sergeant and lieutenant positions, enabling those employees to advance in their careers.

Kersey called Leonard’s appointment by former Sheriff Dennis Proffitt part of the “good ol’ boy” system in Chesterfield County, which has a history of such appointments when an officeholder retires mid-term.

Leonard said he and Proffitt knew each other prior to Leonard’s appointment, but they were not friends. Leonard said he was asked by Proffitt to replace him in 2013. At that time, Leonard said that Proffitt was getting ready to step down to take care of his wife, who later died from cancer. Initially, Leonard said his answer was no, but later changed his mind after thinking about it.

Leonard said he supports some of Commonwealth’s Attorney Scott Miles’ ideas, including reforming the cash bail system because of how it affects those of lower socio-economic status. Leonard also favors decriminalization of small amounts of marijuana – but not legalization.

In response to an idea touted by Kersey to replace the 32 school resource officers that Chesterfield Police use in middle and high schools with sheriff’s deputies, Leonard said that would cost the sheriff’s office $3.3 million. “I am stretched to fill our deputy positions,” he said, adding that his ideas to tackle recidivism have helped reduce the county’s inmate population around 100 per year. That population was around 1,200 when he started, he said, and is now around 800.

The county jail has capacity for 300-plus inmates, and the rest are sent to the Riverside Jail in Prince George, which has been in the news over the past year as critics decry a lack of effective management related to poor treatment of inmates. Leonard said he had no comment on the Riverside Jail because he doesn’t run it. That jail serves inmates from Chesterfield, Charles City, Prince George and Surry counties, along with the cities of Colonial Heights, Hopewell and Petersburg. However, he said, “I don’t see the need to use them ever going away.”

Chesterfield arrestees get sent to Riverside based on what Leonard called “luck of the draw.” There is some flux in the Chesterfield Jail, but it just depends on how many beds, if any, are available when someone is booked, he said.

Leonard said another example of something he started is the safe exchange zone in the county complex.

For more information, go to leonard4sheriff.com.