For the RecordPolice August 13, 2019 Becky Wright

A July 25 crash closed Beach Road for over two hours, tied up traffic and resulted in five summons for the driver. Around 2:26... 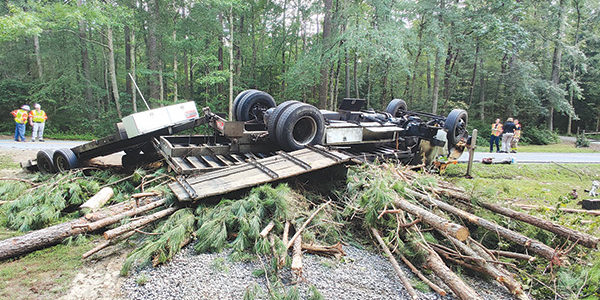 A July 25 crash closed Beach Road for over two hours, tied up traffic and resulted in five summons for the driver.

Around 2:26 p.m., a dump truck-trailer crashed on Beach at Second Branch Road, overturning onto its roof and catching fire. A load of logs and debris that was being hauled spilled.

The driver and three occupants of the vehicle managed to escape with minor injuries.

The dump truck and trailer were tagged for farm use only, which resulted in charges being filed.

“In this case, the investigation indicates the driver wasn’t doing any of that,” Caroon said.

Fire and EMS crews from Winterpock and Cloverhill fire stations responded. A special water tanker unit was dispatched to assist with the fire.