front933
Little by little, the Friends of the Lower Appomattox River are making progress. FOLAR representative Heather Barrar updated county officials about trails in the... 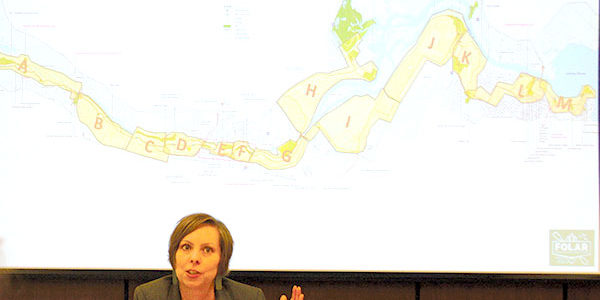 Little by little, the Friends of the Lower Appomattox River are making progress.

FOLAR representative Heather Barrar updated county officials about trails in the area during the Aug. 28 Board of Supervisors work session.

“We brought $2.5 million of improvements to the region over 20 years,” Barrar said. This has resulted in 20-plus miles of trails in an area that includes parts of Chesterfield, Dinwiddie and Prince George counties and the cities of Colonial Heights, Hopewell and Petersburg.

Two trails have been built in Chesterfield and another is planned.

A 1.5-mile trail is located at the John J. Radcliffe Conservation Area north of Lake Chesdin in the Matoaca District. FOLAR is recommending a bicycle and pedestrian bridge crossing to the southern side of the lake in Dinwiddie County.

A .35-mile paved trail is located on Court Street in Ettrick north of the Appomattox River. It connects to a dirt trail that ends near the river, Barrar said.

A 1.5-mile trail is planned for Randolph Farm at Virginia State University in Ettrick.

In addition, an Appomattox River overlook at Virginia State University in Ettrick was completed this spring. It can be accessed by appointment only. For more information, email Jane Harris at jharris@vsu.edu or Yourdonus James at yjames@vsu.edu.

Also in the area, about a one-third mile out-and-back boardwalk opened April 6 at 205 Appomattox St. in Hopewell’s City Park.

The ultimate goal, according to Barrar, is to have a 23-mile trail that runs from Lake Chesdin to Hopewell’s Riverwalk.