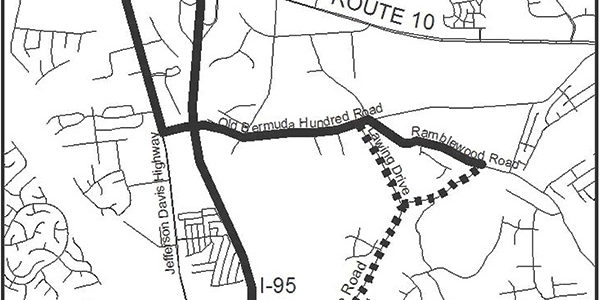 Chesterfield County supervisors last week unanimously approved rezoning applications for a residential development at 9621 Hopkins Road and a new solar farm on 1,677 acres at what was previously known as the “megasite” property, but postponed a decision on the Carvana auto storage and inspection facility until Oct. 23 so the county could advertise some new and amended proffers.

The supervisors approved 98-lot cluster-style homes on 40 acres between Route 288 and Old Lane that would be known as Old Lane Crossing. Farrish Properties LLC is the builder.

On the former megasite property, Torch Clean Energy of Boulder plans to install around 300,000 solar panels south of the intersection of Bradley Bridge and Branders Bridge roads, which was rezoned from R-12 and C-4 to agricultural.

Local attorney Brennen Keene previously said Torch plans to have a groundbreaking in 2020, with the solar farm up and running in 2021. It will take 9 to 12 months to build, he said.

A data center is also planned for the property, but the tenant hasn’t been announced yet.

A walking trail would tentatively be built by the data center for use by its employees and the general public. An east-west freeway would not be built through the property as long as Torch remains operational, which is estimated at 35 years.

“It’s kind of … preserving it in the best way we can,” Matoaca District supervisor Steve Elswick said prior to the vote. “It’s exciting and a smart move because we don’t know what that land will be needed for in the future.”

Carvana delayed
The hottest item of the night was the proposal to rezone 184 acres north of Ruffin Mill Road, east of Interstate 95, from light and general industrial to light industrial with a conditional use permit.

The supervisors had to suspend the rules because the 6-hour-plus-long meeting extended past 11 p.m.

Elswick noted that 18 people spoke during public comment. Continuing, “We have to ask ourselves, ‘Is what we’re doing better than what we can’t control?’” If the supervisors turn down the Carvana project, another business could come in and “decimate” the property “as long as they stay out of the wetlands,” he said.

Proffers negotiated between the county, area residents and Carvana would help protect trees and mitigate traffic, Elswick said. He asked Carvana’s development team manager Todd Ward if the delay would hurt the project. Ward said he wasn’t sure because he’d have to speak with the company’s owners.

“It’s putting money at risk, and we’re publicly traded,” Ward said. “We do have other sites that we have identified in the area, not in Chesterfield County.” He said the Tempe, Ariz.-based company had worked through a couple of delays already.

“I know you don’t want anything (across the road),” Elswick said, referring to homeowners in the Southcreek and Walthall Creek subdivisions, “but something’s coming. Kicking the can down the road … risks losing what we’ve got and getting whatever comes along.” He later added, “They can put a crematorium in there, by the way.”

Board chair and Midlothian supervisor Leslie Haley voted with Elswick against the delay in a 3-2 vote.

“There have been all of these community conversations,” she said. “I don’t know what else we can do in the next 30 days.”

Bermuda supervisor Dorothy Jaeckle made the motion for the delay, which was seconded by Clover Hill supervisor Chris Winslow. Jim Holland joined them in approving the delay.

“I’m really stuck because I understand all of your concerns,” Jaeckle said. “But I also understand what can happen to the property.” She noted that the land is currently zoned for warehouse and distribution centers, for example.

Jaeckle noted that an amended proffer includes language prohibiting parked trucks idling on the property between 11 p.m. and 5 a.m. Another says that overhead doors on the east side of the property can only be opened when loading and unloading. A new proffer calls for a noise mitigation study and plan.

A consent agenda item related to Carvana would also be approved. In it, the supervisors voted to set an Oct. 23 public hearing date in regard to a revised request to restrict truck traffic on Woods Edge Road.

The board had approved a truck restriction on July 23, but it needed approval from the Virginia Department of Transportation (VDOT turned down one such request from the county in 2015.)

The state agency recently responded and requested that the truck restriction route be expanded to include Lawing Drive and the section of Woods Edge Road between Lawing and Ramblewood Road, and that another public hearing be held.