‘Totally … opposite ends of the spectrum’ 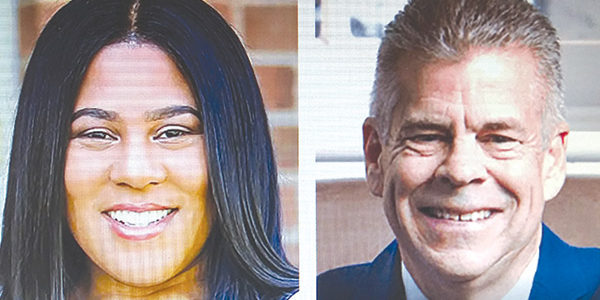 The District 66 race could decide control of the House of Delegates, which the Republican Party has held since 1999.

Cox said it was important that Republicans remain in control because of its pro-business credentials, citing an average Chamber of Commerce grade of “A” for Republicans and “D” for Democrats.

In contrast, Bynum-Coleman said Democratic control would bring teacher pay raises to the national average, result in a minimum wage increase, protection for discrimination for lesbians, gays, bisexuals and transgendereds in housing and employment, along with gun control laws.

Cox noted that Republicans have increased teacher salaries four of the past six years including 5 percent recently, and passed a college tuition freeze. He touted a $1 billion tax cut that he called the second largest in state history.

He said the state has $1.4 million in a rainy day fund, and he wants to add to it, while raising teacher salaries gradually to the national average and freezing college tuition again.

Bynum-Coleman said she wants to raise teachers’ pay to the national average in the next legislative session.

In regard to expanding gambling, Cox is reluctant to do so because there is no regulatory structure in place. He also noted the negative social consequences. Bynum-Coleman supports expanded gambling and called it “a great way to create jobs and have revenue for our education system.”
She supports universal background checks for gun purchases and banning bump stocks. Cox didn’t speak in favor of any additional gun control measures.

Regarding some $400 million that remains in a taxpayer relief fund, Bynum-Coleman would spend it on education and mental health services. Cox wants to use it for taxpayer relief. “If you don’t give it back, you’re raising taxes!” he said.

Following a question about Virginia’s right-to-work law and an increase in the minimum wage, Cox said he supports the first but not the latter. Bynum-Coleman was the opposite on both issues.

In regard to LGBT protections, Cox said he supported Del. Barry Knight’s bill that would clarify the Virginia Personnel Act to ensure that public employees are judged solely on merit and fitness. That bill died in the state Senate, Cox said.

On abortion, Cox called himself “pro-life” and said the GOP stopped in committee Democrat Del. Kathy Tran’s bill that would have allowed abortions up until a baby is born. “That’s why we need a Republican Party,” he said.

In contrast, Bynum-Coleman said, “Government has to get out of a woman’s doctor’s office.”

“We’re two totally … opposite ends of the spectrum,” said the mother of five, real estate agent and owner of a small construction company. “This election is about people vs. corporations.”

Cox, a former teacher of 30 years and father of four boys, has been speaker for two years following the retirement of Bill Howell, who served in the post for 14 years.