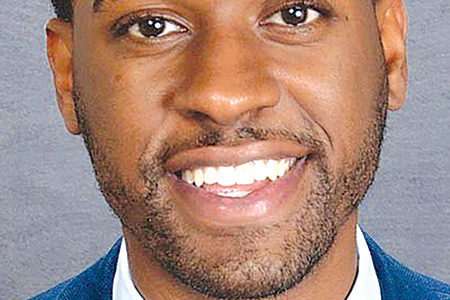 Disbarred attorney Joe Morrissey, 62, and his former employee, Waylin Ross, are squaring off Nov. 5 in a race to replace state Sen. Rosalyn Dance, whom Morrissey dispatched in the Democratic Party primary on June 11.

Ross, 29, filed signatures to run as an independent at the proverbial “last minute” –June 11 – to give anti-Morrissey voters a choice in the general election.

Ross – who said he wants to reorganize the defunct Readjuster Party – and Morrissey participated in a VPM forum Oct. 11 in Petersburg.

Not shying away from controversial stands, Ross said he is against an “assault weapons” ban and favors increasing gun rights for felons.

“Shootings in Petersburg are not with assault rifles necessarily,” Ross said. Noting there are a number of unsolved crimes, Ross said “felons still have to protect themselves.” He added that he favors restoration of gun rights to felons.

Morrissey said he favors an “assault weapons” ban for what he called “weapons of war.” “There’s no reason to have an AR-15 or AK-47,” he said.

In response to a question from moderator Craig Carper about whether localities should be able to take down or modify Confederate monuments, Morrissey said yes. He added, “Washington ought not tell Richmond what to do, and Richmond ought not tell localities…”

“I’m not in favor of taking down or erasing Confederate history,” Ross said, noting that former Confederates and blacks joined together to form the Readjuster Party, which led to the creation of Peabody High School, Virginia State University and Central State mental hospital.

The candidates were asked if the state Senate should conduct hearings about Lt. Gov. Justin Fairfax’s alleged sexual misconduct years ago with two women.

“I don’t think it’s the correct forum. [Fairfax] called for a criminal investigation,” Morrissey said, adding that the two women haven’t requested such investigations be done in Massachusetts and North Carolina, where the alleged crimes occurred. The women have said they would sit before a bipartisan legislative panel, but Virginia Democratic politicians are not willing to take part.

Morrissey criticized state Democrats, many of whom called for Fairfax to step down as a result of the allegations. Morrissey said Fairfax deserves “due process” before submitting any resignation.

Ross said he has no position on whether a Senate panel should hold hearings on the allegations against Fairfax, but said if it’s done for him then it should be done “for all members accused of sexual misconduct.”

In regard to increasing the state’s minimum wage, Morrissey said the last increase was in 2009. He favors raising it to $15 an hour. Ross said the minimum wage should be raised, although he didn’t say how much. It should tied to the inflation rate and increased periodically, he said.

Carper asked about “regulation of life.” Morrissey said he is opposed to the death penalty and is personally opposed to abortion, specifically in the third trimester. Ross said he’s “pro-choice” and “pro-women’s rights.”

Morrissey, who previously served in the state House of Delegates for almost nine years, said he built his legacy on constituent services. His No. 1 issue is criminal justice reform, including creating mental health courts and reestablishing parole. He wants to end use of the cash bail system statewide and end mandatory minimum sentences. Ross said he had no opinion on ending cash bail, but favors ending mandatory minimum sentences.

Both men said they support a “public option” for health insurance, but Morrissey noted that he doesn’t favor Medicaid for all, which he said hasn’t worked in Australia or Europe, two places he’s lived.

Morrissey said he strongly supports passage of a bill that passed the Legislature earlier this year that calls for creation of a 16-person redistricting commission to redraw political maps following the 2020 census. Morrissey called the bill – which was approved 40-0 in the Senate and 83-15 in the House – the “single most important piece of legislation passed this year.” Since it is a constitutional amendment, it would need to be passed a second time next year. “I will fight Democrats who oppose this bill,” he said.

“I’m not sure about this bill, but I support independent redistricting,” Ross said.