The Chesterfield County Board of Supervisors agreed to have a public hearing about a modified noise ordinance to be held during the Dec. 16 hearing.

County Attorney Jeffrey Mincks spoke during the supervisors’ Nov. 18 work session about the proposal.
The county currently has a noise ordinance that goes into effect at midnight, but Mincks said that’s too late. He suggests changing it to 11 p.m. and adding some restrictions for daytime hours as well.

In addition to the noise ordinance, Mincks proposes adding a requirement that one have a berm or backstop when target shooting so that bullets don’t go onto adjacent properties. According to a board document, the berm/backstop proposal is consistent with National Rifle Association standards. 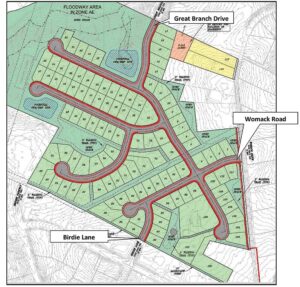 Rezoning
The supervisors unanimously approved a request from Emerson Companies LLC to rezone a 44.4-acre property at 11420 Womack Road from agricultural to R-12 residential.

The request included a conditional use planned development for up to 113 lots.

The largely undeveloped property is in a revitalization area, so it would not require cash proffers.

The property — which is located between the Chesterbrook Farms and Dense Wood Hill subdivisions — would primarily be accessed by Womack Road, but also by Great Branch Drive to the north and Birdie Lane to the south.

Park contract approved
The supervisors approved a $1.84 million contract to Southwood Building Systems for Phase 2 of construction at Harrowgate Park.

In 2018, the new Harrowgate Elementary School location was chosen on the southern portion of Harrowgate Park, one of the first parks in the county system when it opened in 1978. An additional 26 acres of parkland was acquired that same year to replace lost athletic fields and picnic facilities. A plan was developed to use Harrowgate Elementary and Carver Middle schools, the remaining portion of the old park, and the new park to provide comprehensive recreation facilities to serve the community.

The finished Phase I includes two athletic fields at the middle school, lights, and irrigation. Phase II will complete the athletic improvements at the middle school. It will add lighted baseball and football fields, restrooms, a concession building, a new entrance off Harrow Drive into the old park, and more parking. Middle school basketball courts will be lit, and circulation systems will be improved in compliance with ADA guidelines.

Grants
In other action, the supervisors accepted a $1.19 million Comprehensive Opioid, Stimulant and Substance Abuse Program grant as well as a $100,000 grant from the federal Department of Homeland Security.

The COSSAP grant provides specialized pretrial supervision to those considered at high risk for overdose and expands re-entry planning and medication-assisted treatment to inmates. The project includes partnerships among the Chesterfield County Sheriff’s Office, Chesterfield Community Corrections Services, Chesterfield Mental Health Supportive Services, and a local evaluator. The project is entirely funded by federal funds, and no local match is required. The grant period runs from Oct. 1, 2020 to Sept. 30, 2023.
The DHS grant’s stated purpose is to enhance election cyber security.

Two replace John O’Neill and Harril Whitehurst and one fills a vacancy.