A 2011 survey conducted by the ING Foundation showed that next to immediate family, teachers had the most impact on a person’s life as they grow up. According to the results, 88 percent of Americans had a teacher who positively impacted their life and 83 percent had a teacher who helped build their self-esteem and confidence. One such teacher who has been lauded for his positive impact and relationship with students is Kyle Berchtold, a fourth-year English and Social Studies teacher at G.W. Carver Middle School and recent Teacher of the Year nominee. 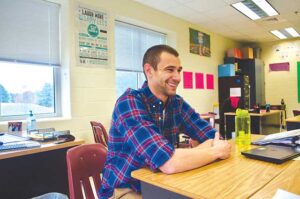 Kyle Berchtold, eighth grade teacher at Carver Middle School has a unique way of connecting with his students.

The basketball book club’s purpose is to motivate eighth-grade males to read for pleasure, and it was the brainchild of Carver Middle’s principal, Dr. John Murray. Berchtold said Murray created the group based on the good relationships he built with students in the sixth and seventhgrade.

There are 10 active participants in the group this year. The club’s success has led to plans for a football club and a group for girls next year. The reward for finishing the first book is a trip to the Siegel Center to practice with VCU Rams. The reward for finishing the second book, a football-themed book, will be a similar effort with the football team at Virginia State University. Berchtold said he is looking for a book and incentive for the young ladies.

In regards to his after, school remediation classes, Berchtold said he started out with a small group and once he opened it to everyone, there was a staggering response.

“I started out just having a few kids who I knew could benefit from the extra help and one on one time but last [week]I just offered it to anyone,” Berchtold said. “I said ‘If anyone wants to stay after, I’ll be staying after for an hour, get some extra help for the SOL’s (Standards of Learning) [and]we had close to 25 kids that stayed after. I didn’t make any phone calls [to parents saying]‘Your kid needs to stay back,’ they just chose to stay after.”

Berchtold said he spent the first years of his teaching career trying to be perfect, but as he progressed, he got better at figuring out his strengths and weaknesses. As a result, he realized he was not fond of the typical classroom lecture, and he eschews that in favor of project based learning.

“I try to do as little [lecturing]as possible because I … remember when I was in school, as soon as I saw that happen, my head went down and I know the [students]are going through the same thing,” Berchtold said. “If I get tired of my hearing my own voice, I know they’re tired of hearing my voice so I try to do at the most maybe 10, 15 minutes of lecturing a day [and]the rest of the time is independent work or group work, [which is when]I really see their creativity come out and they actually learn.”

Berchtold, who credits his assistant teacher, Terri Faison, for being influential in his teaching career, said he does not have plans of teaching college students and that he can make a bigger impact with middle schoolers.