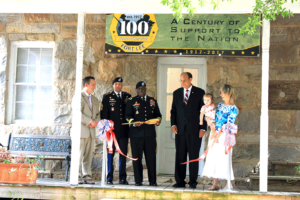 The Fort Lee Centennial Exhibit, Mobilizing for War, is officially open in Chesterfield County at the Historic 1892 Jail. This exhibit commemorates the establishment of Camp Lee (later Fort Lee) as part of the mobilization efforts of the U.S. Army for World War I, and its current status as the center of logistical sustainment for the U.S. Army.

The exhibit contains war posters meant were to mobilize the country to either join the Army or support the war effort as civilians. The Fort Lee exhibit will be on display in the Historic 1892 Jail museum until November 2018, as part of Chesterfield County’s commemoration efforts for World War I and the impact it had upon the county. The purpose of the exhibit is to draw attention to the importance of the creation for Camp Lee as a major training post that equipped and prepared troops for fighting in France in WWI. The jail is located at 6819 Mimms Loop in the Chesterfield