BY L. FAUSZ
The “Lace House,” a legacy piece of the former owners of Meadowbrook, has returned to the gardens of its current owner, Meadowbrook Country Club. Known as a summer house, a replica now watches over the reflecting pool and the restored Charles Gillette gardens, thanks to the vision and seven-year effort that included lots of work, lots of hours, and lots of fundraising by the Women’s Club of Meadowbrook and committee members of the Gillette Gardens at Meadowbrook Inc., a public charity. Committee members, invited guests, and descendants of the original creators of the gardens dedicated the Lace House and gardens with a ribbon-cutting ceremony and champagne toast last Wednesday. 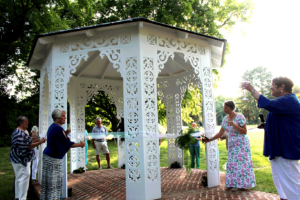 Ribbon cutting at opening of the Lace House 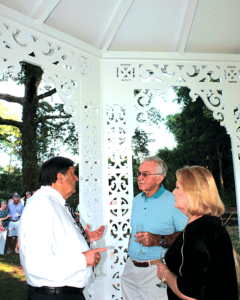 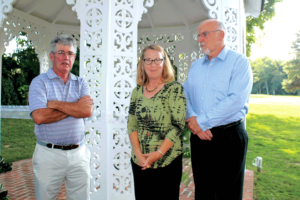 Pete Gotwals by the Lace House with Kathy and Chris Griffin. 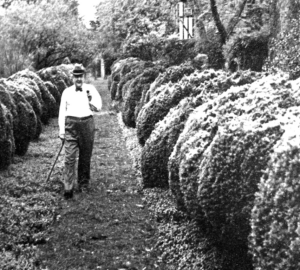 Diane Murdock-Thorp, president of the foundation, welcomed guests and gave a brief history of the Lace House, the original and the construction of the replica, and a thank-you to all parties involved in bringing the project to realization.

Integral parts of the process of getting the replica off the ground were descendants and brothers Chris and Scott McCracken.

“I remember playing in the Lace House as a kid when it was in Church Hill,” said Chris McCracken, a historical restoration contractor. The brothers’ grandmother was Waller Jeffress Roberts.

“Gardening was her passion,” He said about his grandmother and as noted by his great-grandmother and great-great grandmother. “It is a beautiful addition, and Leon [Reynolds] did a wonderful job. It is truly an identical match.”

Scott McCracken, an architect, said. “It has been a labor of love, and we enjoyed every minute of it. It is an embodiment of our own history.”

Leon Reynolds’ company, Reynolds Architecture Woodworking, had a huge challenge ahead of them when they took on the project. “Chris and Scott were the brains behind it,” Reynolds said. The first process was to acquire the software to be able to program the design into the machine after many measurements were taken. Accoya was the type of wood used, and it has a guaranteed lifespan of 50 years. “I didn’t think it would look this good,” Reynolds said. “It was one of the most challenging projects we have done.”

Scott McCracken said it is the paint and repainting over the years that will maintain the life of the structure.

On-site, brick was laid, lights installed, and the garden house constructed. Fourteen gallons of paint and primer were used to complete the project.

The garden’s restoration includes the installation of an irrigation system, lights throughout the gardens, clearing paths, and planting. Visitors may now walk through two tea gardens named the “tea trail.” A cutting garden with flowers is identified by signage, and a plaque with a brief history of the Meadowbrook gardens has been installed.

The Meadowbrook mansion and its 687-acre estate was owned by Mr. and Mrs. Thomas Fox Jeffress. Twenty acres were devoted to a garden full of surprises, said her daughter-in-law, Mrs. Robert Jeffress, in a 1969 article in the Richmond News Leader. “Many little vistas would open to the eye as one walked the grounds.”

The original Lace House was constructed in 1800 by silversmith Samuel Myers and was purchased by the Jeffresses for $10 in 1900 for their gardens. It had been owned by two additional owners before coming to the Meadowbrook gardens.

The garden house came by its name when Dougald Walker, a Richmond artist visited Mrs. Jeffress and remarked, “A house of lace,” according to a quote by her daughter-in-law in the 1969 article.
After the sale of the property to the country club in 1955, says the article, the Lace House continued to harbor guests; this time they were golfers taking shelter from the heat with its positioning alongside the links. Surviving a $1 million fire that swept through the central and east portions of the 25-room, four-story house that had become the club house, the garden house was eventually rescued and restored by the Historic Richmond Foundation.

The Lace House now rests at the Lewis Ginter Botanical Gardens. The foundation tried to purchase the Lace House, but the center was not interested in selling.