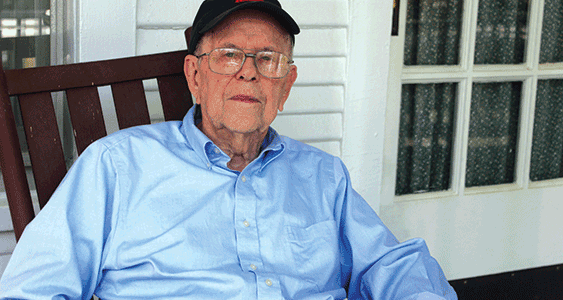 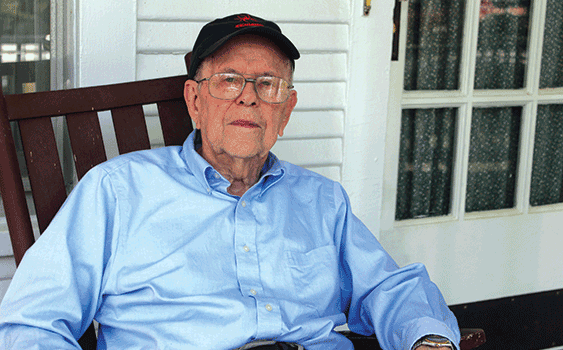 His wartime memories seem the most vivid as he shares his experiences as a Marine Corp veteran of the “War in the Pacific” and the loss of four friends.

“Bensley was a very small community prior to World War II,” he said. “There were about 20 young men from the community that were drafted. All served overseas and four were killed in defense of our great country. We all went to Chester High School together.

“Bruce Graham was my best friend in high school. He was like a big brother. He encouraged me to study. He would say, ‘Billy, you will never get very far in the business world unless you have a good education,’” Stubbs said. “Bruce was determined to be a Navy fighter pilot. He became a U.S. Navy fighter pilot and was assigned to the USS Hancock. He lost his life in the Pacific.”

“Billy Dunkelberger, another friend, became a Navy fighter pilot and lost his life in a training exercise off Melbourne, Florida. Joe Schaffer lost his life in the Philippines. He was a member of the U.S. Army Infantry, and Whit Stephens, a bombardier on a B-17 Bomber, lost his life over Europe. I never forgot them.”

Stubbs was 19 when his mother drove him to the train station on Broad Street that today is the Science Museum. “We were heading to Parris Island. All of us were going out to the Marine Corps, three, four cars, they were all full,” he said.

After initial training, he was assigned to the USS San Jacinto, the same ship as former President George H. W. Bush. “I remember [Bush] when we boarded the plane in Philadelphia when we were heading to the western Pacific,” he said. “We were Task Force 38, the largest in the Navy, with 16 aircraft carriers.”

Defeating Germany was only part of America’s mission during World War II. Japan had intensified the attacks on American ships with suicide mission flights. During his time in the Pacific, Stubbs witnessed many such kamikaze flights and many close calls. “It was difficult to shoot them down,” Stubbs said of the kamikazes. “They would come in at 250 to 300 miles per hour, and if they weren’t shot down, they would come straight down and hit the ‘drink’ and die instantly.”

Stubbs served two years with 17 months on active duty in a forward combat area. When he returned home he enrolled at the University of Richmond under the GI Bill.

After graduation, he went to work for Sinclair Oil Co. for 18 years. British Petroleum purchased Sinclair, and he continued working for BP for 16 more years.

After retirement, he and his wife, Nell, returned to the family home on Sherbourne Road in the Bensley community in 1985. The circa-1905 15-room former tourist home was in need of repairs. He was able to complete those repairs while working part-time in commercial real estate for 10 years and then another 10 years doing inspections for insurance companies.

When the county purchased land in the Bensley community for a community center, Stubbs decided to do something to honor his four friends. “Twenty-three years ago, I started thinking about the boys that died …” he said. “The park was under construction. Jack McHale, a Vietnam veteran, was our supervisor. I asked him for a spot in the park to erect a monument to the four young men. He gave me the most prominent spot in the park.”

“We had our first Veterans Day program in 1996,” he said. “I had great support from the community leaders: Leon Johnson, Margaret Davis, Brian Walker and Larry Klegert. The first speaker was a friend of mine from Benedictine High School. He was in the Army infantry and landed at Omaha Beach in the first wave. He was a private and on the second day of battle, because of heavy losses in his company, he was promoted to sergeant. They fought all the way through to the Battle of the Bulge. He received the Silver Star, Bronze Star and Purple Heart. He returned home, graduated from University of Richmond, and became vice president of a large office supply company.”

Over the next five years, Stubbs invited University of Richmond friends, all combat veterans, to be speakers.

“I then decided to call Lt. Cmdr. Paul Galanti, who was shot down over North Vietnam on June 17, 1966, and was a POW until February 12, 1973,” he said. “He took my call, and much to my surprise, accepted my invitation to be Veterans Day speaker. He came out with his wife, Phyllis, who had served as chairperson of the wives of POW and MIA. She went to Paris and met with the top leaders of the Viet Cong. Soon after the meeting the prisoners were released.”

“We have had a series of great speakers. I would say we have had better speakers than the Virginia War Memorial.”
Stubbs said he could not have held the Veterans Day services for the last 22 years without David Potter, the center’s former director. “He is a great organizer and does a fantastic job of getting the [Fort Lee Army Band and the] JROTC cadets from Thomas Dale High School,” Stubbs said. “He has been a blessing.”