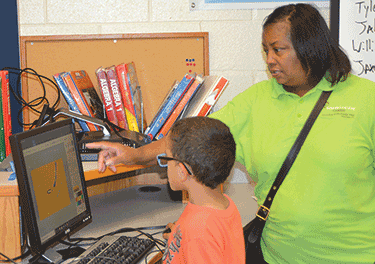 front933
An idea that started at Meadowbrook High School six years ago is now being used at L.C. Bird High. Matt Bland, teacher of the...

An idea that started at Meadowbrook High School six years ago is now being used at L.C. Bird High.

Matt Bland, teacher of the Success program that works with at-risk ninth-graders, needed someone to help him with the Bridging the Gap computer program, and he recruited Bill Stehle, a retired Dominion Virginia Power Co. employee.

“I’m a great facilitator, but I didn’t know anything about technology,” Bland said.

Stehle, who worked in the information technology department at Dominion, was seemingly the perfect fit.

Bridging the Gap works in conjunction with the Virginia Star program that recycles used desktop computers from government agencies and schools. The computers are delivered to a ninth-grade class that rehabilitates them with the help of Stehle and Microsoft employees.

“It takes a village,” Bland said about Bridging the Gap. “It creates a cycle of goodwill.”
He said the computers are “basically paperweights when we get them.”

His class of 15 students recently rehabilitated 20 computers, which were donated last week to 20 youths from Bellwood Elementary.
Lawrence Aguilar is a ninth-grader in Bland’s Success class. He got a rehabilitated computer two years ago as an eighth-grader at Falling Creek Middle School.

“It was pretty cool because I could do more school work at home,” Aguilar said. And he could watch YouTube and other videos, for example.

He ended up building his own computer after getting help from a Microsoft employee.

Bridging the Gap started at Meadowbrook and was there for three years before being used at Salem Church Middle School for one year and at Hermitage High School in Henrico County for a year.

“They figure out why they’re not working,” Stehle said.

Microsoft employees have helped by contributing $40 each for software, which is purchased with an employee discount. The company’s Glen Allen office matches its employees’ donations with one that goes toward the Success program.

Stehle said the classes typically order more computers than they need from the Virginia Star program — they ordered 25 this year — and use some for parts.

Ten meetings are typically held with students in the second semester each year.

The students who rehabilitate the computers enjoy the program.

Johnathan Hicks called it a good learning experience. “It’s a great program. It helps improve their education,” he said, referring to the elementary students.

“It’s great to help others and just know you helped somebody,” Alex Brown said.

Bellwood Elementary student Miguel Morales received a computer last week. “I think I like it because it has paintings,” he said while checking it out at L.C. Bird.