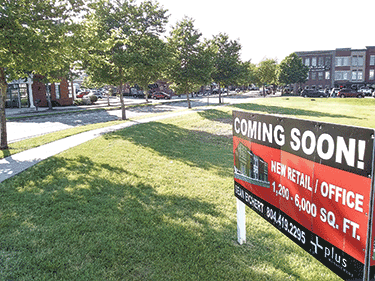 Eichert said plans are to break ground by Aug. 1.

The new building will be the sixth in Festival Park, which makes up part of Village Green. The Festival Park portion of Village Green includes 6.93 acres, he said.
“It’s the one missing link in the front,” he said of the planned building. “It will serve as kind of an exclamation point on the park.”

The first floor of the building will be retail office, and apartments will be on the second floor, he said.

Eichert said he is in negotiations to bring businesses to the building.

He has been involved with Village Green since its inception in 2009. He called it a “Live, work, play village concept.”

Another piece that was envisioned as far back as the early 1990s is the Chester Center for the Arts. The proposed 22,000-square-foot facility would be located next to the Chester Library across the street from the Village News.

Chesterfield Cultural Arts Foundation chair Hugh Cline said recently that the group was closing in on its $3 million fundraising goal.
Voters approved a bond in 2004 for $13.9 million with some of the funds to be used for the arts center.

Last August, the supervisors approved an additional $3 million in funding with $2 million to come from the county and $1 million from private funding, according to county spokeswoman Allie Gibson.