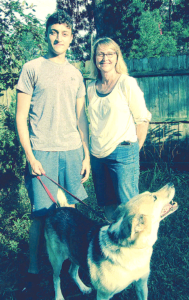 Most of the year, Andrea Sisson works as a reading specialist in local schools, but during three recent summers, she has traded her laptop and headphones for salmon nets and gardening tools, trekking to a homestead on the Yukon River in Alaska with her son, Nick, a rising freshman at Virginia Tech.

After their second summer in the Alaskan bush in 2015, the mother and son returned home to Chester with a former sled dog, Donner, who made the transition from sled dog life to suburban life look easy.

For Andrea, coming home was a different story. “Coming back to the modern world was culture shock, especially the noises,” she said. “In the bush, it’s birds and the river and the dogs howling. Here, the noises are distracting.” She described the sounds in the bush vividly: a rapt listener can easily imagine she’s there, lying awake at night listening to the musical howls of contented sled dogs after a satisfying day’s work.

Nick shared the struggle. “It was difficult to return to civilization with crowded, noisy places and traffic,” he said.

Life in the bush isn’t easy by modern-day standards. Andrea and Nick lived on a homestead within view of the Yukon River, where “the only way in is by boat during summer, when the ice melts, or via dog sled in the winter,” Andrea said. “It’s very remote. There’s no running water and minimal electricity. The closest town is approximately 30 miles away.” Because their location was so secluded, “one of the biggest lessons we learned was in ‘bush economics,’” she said. “It is so difficult to get to the Fred Meyers [like Costco]in Fairbanks that you have to shop in bulk – not the kind of bulk we think about here… 30 boxes of spaghetti and maybe 15 bags of tortilla chips at one time. The cost of a bag of Doritos at the closest store was over $10 – that’s bush economics.”

Though she didn’t have access to everyday conveniences like electricity, groceries and running water, she felt that living in the bush offered more luxury than modern comforts ever could. To illustrate her point, she described how there was no way to shower in the bush, but there was a sauna.

“Just imagine the crackling of a fire as it burns away at the wood in the stove we used to warm the sauna, and you have to wait two hours for it to warm up,” she said. The effort of preparing the fire herself and then having to wait for it to warm up the sauna, made the entire experience sweeter, something to savor. This was no rushed weekday morning shower before hurrying to work; it was an experience.

But it wasn’t just the sauna that felt luxurious. Andrea also relished preparing and eating fresh salmon, pulled from the water the same morning it was consumed, and the fresh vegetables grown in the homestead’s garden, which she helped tend.

“There’s so much beauty and untouched wilderness and fresh salmon! Lots of it! We checked salmon nets twice daily and always had a huge fish in the net–usually at least 15 to 20 pounds,” she said.

Checking the nets and helping prepare the fish gave her a deep sense of connectedness with the wilderness and an appreciation for conscientious, responsible living.
“There’s a level of appreciation when you have to do things consciously and think and things aren’t readily available,” she said. “Water, for example, becomes precious.

You see water in a whole new light.” She described how, when brushing her teeth, she would use only a small cup of water, dip her toothbrush in the water, brush and use the same water to rinse. “No water changes everything. You come back here and see people water their lawns and think, ‘Why are you wasting your water?’” she said with a laugh.

The biggest difference she sees between Alaskan bush life and life in the civilized, modern world is living deliberately versus carelessly.

“There’s just no thought here. We’re on autopilot with our fast food, smartphones, TV. There are so many distractions – we’re not really living,” she said. By comparison, in the bush, people “live deliberately.” They have to think about their resources, how to procure them and best use them. Waste to her is a shameful thing. She sees it as a more natural way of living.

Nick agrees. “Working there gave me insight on a different way of life – a self-sufficient way of life and the work involved,” he said. He enjoyed “the scenery, the peaceful atmosphere and getting away from everything, the wilderness and fishing. There, you have something to do all the time that is interesting. The work is necessary.” For him, there was purpose for each task required to survive in the bush.

Back home, he found himself “somewhat bored and sucked back into social media and electronics very easily.”  But in the bush, it’s normal and natural to go without the technology most of modern society considers basic. In fact, for Andrea, people here can only try to escape modern technology when they need a break from the constant stimulation and distraction of social media, video games and smartphone notifications.

“You can go to the farm or go out to the woods, but you can’t escape technology. It’s still there,” she said. In the bush, people can live a simpler, more deliberate existence. They think about each action.

Despite the hardships, Nick has asked if they can go back next summer.

“Staying there,” Andrea said, “was no less than magical.”