front939
Enon Elementary reopened earlier this year with a new building and now has a new principal: Paula Huffman. She began working at the 530-student... 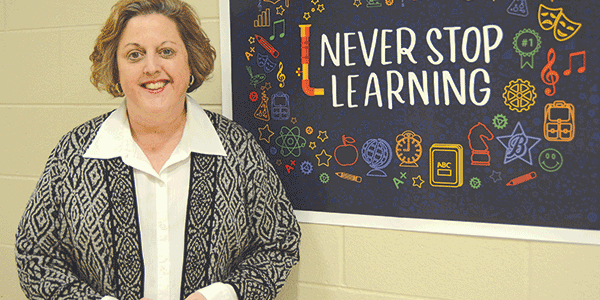 Enon Elementary reopened earlier this year with a new building and now has a new principal: Paula Huffman.

She began working at the 530-student school Jan. 28 and notes that the school’s student body will be over 700 in the fall due to redistricting.

It is the Georgia native’s fourth job as a principal. Huffman previously worked in Cobb County, Ga., and in Loudoun and Williamsburg-James City counties.

“Leadership development is crucial to ensuring that there are leaders ready to assume roles as other leaders are promoted or retire,” Huffman said, noting that she missed the daily impact of working with students and teachers in her last job in Loudoun. “I am thrilled to be back in a school setting and count myself very fortunate to have landed at Enon Elementary.”

Teaching runs in Huffman’s family as both her parents taught and her father worked in school administration. She thought she would own a bookstore on the beach because of her love of reading, but decided to pursue education instead. She has a bachelor of science degree in early childhood education, a master’s in media and a doctorate in educational policy, planning and leadership.

She has taught all subjects for pre-school and second and third grades. She also taught technology as a media specialist for elementary and middle schools. Huffman said she was willing to take on additional responsibility and enjoyed leadership roles, so she eventually transitioned to be a principal.

“I had several friends who were joining a cohort to earn an administrative degree, and they encouraged me to be a part,” Huffman said. “I really enjoyed the coursework and the complexity of the role and decided to stick with it as a new challenge.”

As a principal, she enjoys being a positive culture builder. People underestimate the power of an encouraging word and a smile, she said.

During her time as a principal in Williamsburg-James City County Public Schools, Huffman encouraged the use of social media and opened a Twitter account, which has helped her connect with educators to stay current on instructional practice. She said social media provided another tool to engage parents in their children’s learning and enhance communication.

“I think that social media has allowed us to open another form of home-school and home-classroom communication,” Huffman said.