front939
P.C. Amin was honored as the Chester Business Association’s Businessperson of the Year last week. In receiving the Snead-Stebbins Award for his efforts to... 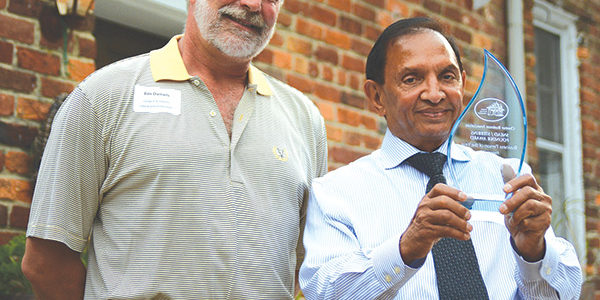 P.C. Amin was honored as the Chester Business Association’s Businessperson of the Year last week.

In receiving the Snead-Stebbins Award for his efforts to promote business in the Chester area, Amin gave the area high praise.

Amin, who immigrated to the U.S. from India, said locals have not given him any problems in his almost 50 years in Chester.

“Whatever I have done, I could not have done without my wife (Purnima),” he said.

Amin initially worked as an engineer with the Virginia Department of Transportation.

“He bought his first hotel in 1979 in Chester,” Realtor Jim Daniels said, noting that Shamin Hotels is now the largest hotelier in the state. The company recently announced plans to build a hotel and conference center at Stonebridge near Routes 60 and 150 as well as a hotel and retail and office buildings on 12 acres east of Interstate 95, south of Route 10 near five of its hotels at Shamin Park.

“We’ve got a ‘big shot’ right here in Chester,” Daniels said, adding that Amin built the Cultural Center of India at 6641 Ironbridge Parkway.

Sam West said he met Amin through their time on the Chesterfield Cultural Arts Foundation board. “He’s a man of few words,” West said. “When he [does] speak up, it’s very meaningful.”

The Amins’ only child, Neil, who has been CEO of Shamin Hotels since 2008, said his dad taught him the value of hard work and to do what’s right. “He believes in taking care of others,” Neil said.