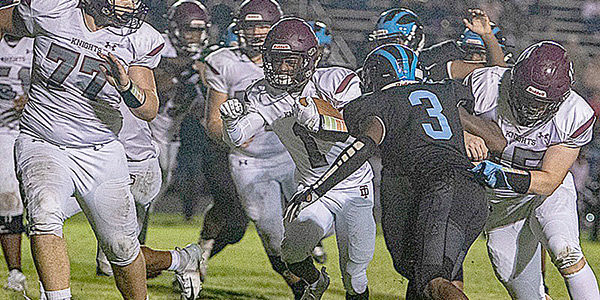 By Soren Rutherford and Joe Short

Thomas Dale 28, L.C Bird 0
Thomas Dale continued their good start to the 2019 season by shutting out rival L.C. Bird and winning the Battle of Chester.

The Knights have won two of the last three meetings between the crosstown rivals.

Dale’s run game proved to be the difference-maker in a game that was nearly silent in the first half.

Through the first 11 drives of the game, 11 straight stops were recorded, and seven punts were made between both teams in that time span.

That all changed near the end of the second quarter when Chris Tyree punched in an 8-yard rushing touchdown. At the half, the Knights led 7-0.

From there, it was all Thomas Dale. Tyree’s running helped set up a 50-yard scramble by quarterback Jasiah Williams for a score.

Then Deangelo Gray took off to the left side and broke several tackles for a 60-yard touchdown.

The Knights totaled 261 rushing yards and scored each of their four touchdowns on the ground.

On the defensive side of the ball, Thomas Dale dominated. The Knights kept a usually potent Skyhawks run game at bay, limiting the Skyhawks to just 48 yards on 46 attempts.

As for the passing game, the Knights clipped the Skyhawks’ wings as they gained nothing through the air. In fact, L.C. Bird did not register a first down until the closing minutes of the first half.

Next up for Thomas Dale (2-0) is a battle with Hermitage on the road, while L.C. Bird (0-1) welcomes Huguenot to Dutchman Field. Both games kick off Friday at 7 p.m.

Although he missed an extra-point attempt, kicker Aidan Redmon booted the game-winning field goal from 26 yards out.

Although the score might not show it, the Matoaca offense had a productive evening.

Their ground attack led the way as Daquan Vann ran for 70 yards and the lone touchdown of the game, a 14-yarder in the third quarter.

The offense had one problem: turnovers. Their fumbles helped to thwart drives. Matoaca gave the ball away three times on otherwise successful drives.

Matoaca’s defense was led by Brayden Spade, who was a menace all night, leading the team with 10 tackles and two sacks.

Starting defensive back Jordan Robinson went down in the second quarter with an injury, but Devin Bailey stepped in and excelled.

“He was lights out,” Matoaca coach Jay Parker said of Bailey.

In addition to the field goal, special teams played a huge role by blocking two field goals. The first block was by Nathaniel Dozier and the second by Ben White, one in the fourth quarter and one in overtime.

On Friday, the Warriors travel to play a high-octane Varina offense at 7 p.m.

The Blue Devils are 1-1, but have put up 102 points combined in a double overtime loss to Manchester and a victory over Meadowbrook.

Varina 64, Meadowbrook 0
Meadowbrook continued to struggle in their second game of the season in the midst of a rebuild.

The Varina Blue Devils were coming over a close loss to Manchester and came at the Monarchs full force. They improved to 1-1 on the year, while Meadowbrook dropped to 0-2.

Things don’t let up for Meadowbrook; they face off with three-time reigning state champions Highland Springs Friday on the road. The Springers have won two games against big-time programs to start the season, defeating Oscar Smith 13-6 and Avalon, Md., 38-13.