The journey is the reward.

For Nick Burd, the newly appointed coach of Matoaca’s boys’ basketball program, getting the job was a goal he had long worked toward. 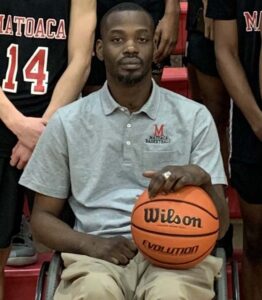 “It means everything, it’s most of the reason why I started coaching,” Burd said. “To coach at Matoaca High School.”

Coaching became a passion for Burd after a scholarship to the Naval Academy didn’t come to fruition. With plans to transfer to Virginia Military Institute, he was back home driving in Dinwiddie County when tragedy struck.

While attending Southside Community College, he fell asleep at the wheel, drove off the road, and through a ditch. Somehow, the car became airborne, sending Burd and his vehicle through a billboard and into the base of a large tree.

The crash had badly damaged his spinal cord, and Burd heard from doctors that he’d be a ‘vegetable,’ and that he would have no feeling in his body and wouldn’t be able to breathe, talk or eat on his own.

Luckily for Burd, two years of rehab started to improve his condition, and about four or five years into a grueling rehab schedule was able to use his upper body, but he remains in a wheelchair.

A standout athlete at Matoaca (Class of 2004) under then coach Charles Payton, Burd also was a standout for Team Richmond’s AAU program under Collegiate coach Del Harris. His basketball playing days came to an end.

However, Burd said that the negative feelings behind sustaining such life-changing injuries were quelled by the tremendous outpouring of love and help from the Matoaca community.

“I felt like that [negative]for maybe a day or so,” said Burd. “Then I thought, it wasn’t the end of the world, everyone wanted to see me get back up.”

“Enough people were sad already, there’s no reason for me to be sad.”

“Whatever I wanted to do or that could be done with the people that had my back,” Burd explained. “It was mostly Matoaca people and the community I’m working in now. People donated a lot of money, renovated my house for me. There was a lot of love coming out of Matoaca for me.”

The community with which he chose to go to war on the hardwood in Matoaca’s first seasons as a VHSL AAA school went to war with him during the toughest time in his life.

Then, coaching came to the forefront.

Burd’s grassroots start in coaching was with a group of youngsters in his Ettrick neighborhood.

Some of those players had been cut from Matoaca’s high school team. He worked with the youth on the blacktop, then got in touch with the Ettrick Youth League and formed a team for them.

They needed a coach, so Burd naturally fit. That year, his recreation league team won the championship.

When Burd went back to finish his associate’s degree, coaches noticed him helping a group of players work out, and he was able to assist there. At Hermitage High School, he was an assistant under coach Rob Rice, then the junior varsity coach.

During that time, Del Harris invited him to help coach Team Richmond. Harris, who coached Burd in 2003 and 2004 in the same AAU program, knew Burd well.

“He was a fierce competitor as a player,” Harris said. “Sometimes his emotions would take him over. But sometimes, he would play so hard and get so into it that maybe it hurt his focus. When he harnessed those emotions and you got that focus into him, he was unstoppable- and that’s why he earned a D-1 scholarship.”

Harris saw things come into focus for Burd as a coach.

“He absorbed knowledge of the game,” Harris said. “His focus is now on helping young kids, mentoring them, and sharing his story and journey,” he continued. “As it turns out, he’s gotten pretty good with his X’s and O’s as well.”

“Nick accomplished his goal [getting the job at Matoaca]after getting punched in the face. After an accident like that, what do you do? Where do you go?.”

Last year at Matoaca, Burd found himself in a unique predicament. When coach Dennis Calloway’s tenure as a Warrior ended, The JV coach was in the midst of leading the program to a 16-3 season. However, he was asked to do double-duty and ended up coaching both varsity and junior varsity for the remainder of the season.

He helped to facilitate a turnaround, as the Warriors won four of their last seven games.

“[This was] the biggest challenge I’ve ever faced in basketball as a player or coach,” said Burd. “Just because of my level of passion, I lost my voice after the second day, and I never really got my voice back until the second or third week after the season ended.”

After the interview process, Burd figured he had a chance to get the job, but respected that a better candidate could come along. Ultimately, he got the long-awaited call.

“There are a lot of people out there coaching just to coach,” said Harris. “That’s not the case with Nick, Matoaca is a great shape. He’s coaching to build a program, he’s coaching to change lives and his best days are ahead of him.”

Of course, with the 2020-21 season on the horizon, Burd is already eyeballing the chance to get back out there, with tryouts targeted for Dec. 9.

“I feel good, I’m very confident in our group,” said Burd. “A lot of athleticism and speed, not a lot of size, but a lot of heart. We are going to play together, [with]a lot of passing, [in]high tempo, [and]quick passing, but our backbone will be defense.”

Burd, because of the severity of the accident and his injuries, is extremely fortunate to have this opportunity and likewise so is the Matoaca community.

“I’d rather coach than worry about myself,” said Burd. “I can see the bigger picture of things as a coach.”
Burd brings a valuable life lesson for us all and passes it along to his players.

“Just enjoy and embrace every moment, focus on the things that they can control,” Burd said. “I can’t control my physical condition, but I can control how I respond to it, and the same goes for my players and any situation they face.”

One day after his rehab ended, a friend scolded Burd for sitting out in the rainstorm.

Burd replied: “Because there was a day when I couldn’t even feel the rain.”

As Dolly Parton once said, and Burd would probably concur. “The way I see it, if you want the rainbow, you gotta put up with the rain.”

So don’t be surprised if you see the Matoaca community and Burd, embracing the rain once again.