After a layoff and delayed start from COVID-19. Currently, about 70 percent of the teams in the state are playing high school basketball, with more to start later. The regional tournaments will begin around Feb. 8. 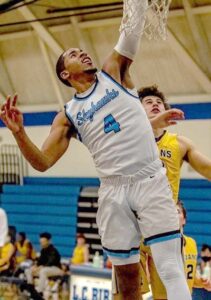 Some teams in the area and state have had positive tests. In such a case, the team must have a 14-day quarantine, but is allowed to reschedule their games (up to 4 per week for CCPS schools) before the start of regional tournaments.

Both the L.C. Bird boys and Matoaca girls started their seasons with a flourish, going 3-0.

The Skyhawks are playing their typical brand of balanced basketball, led by a new star, Benedictine transfer Jaden Daughtry. His 24 points were instrumental in the team’s closest game of the week, a win over James River.

The Matoaca girls, despite a disappointing end to a 20-win season last year, have picked themselves up. Despite the loss of four seniors, the team won its first three games. Much different on paper, the team is smaller and more guard-oriented. Division I recruit Lauryn George, along with Maia Pettaway and Hannah Williams, led the way.

With a young roster, the Meadowbrook boys split a pair of games, and the Meadowbrook girls narrowly lost to Matoaca 57-51. The boys will feature a balanced attack, while the girls have two of the best seniors in the area in Maya Ellis and Trinity Price.

The Bird girls won one of three contests this week, finishing the week off on the right foot with a win over Powhatan. Freshman Trinity Dale has made a strong showing, as had senior Taliyah Black.

The Matoaca boys, under new coach Nick Burd, are rebuilding, and they showed good potential in both contests this week, although falling. Tristan Cole is averaging 13.5 points a game and has been consistent early.

The Thomas Dale boys and girls both won their first games of the year. The boys defeated Prince George, but it took them two days to do so; senior guard Kylon Lewis broke the rim on a breakaway dunk as he hung from it to avoid landing on opposing players. He finished that contest with 23 points, and Miles Phillips played well. Stevan Henry, the team’s new point guard, also had a great effort. The girls defeated Petersburg and now have a core of sophomores and juniors rather than mostly freshmen, Ayanni Madison and Janiyah Jackson led the way statistically for the girls.

Carver Academy started their season with a 45-38 win over Mathews. Coach Reggie Simon got a balanced effort from his boys, led by Issac Lee with 13 points.