front933
Pencil shavings and ink stains are just a few things that the Zazu Ziners are used to when creating their one-of-a-kind comics in preparation... 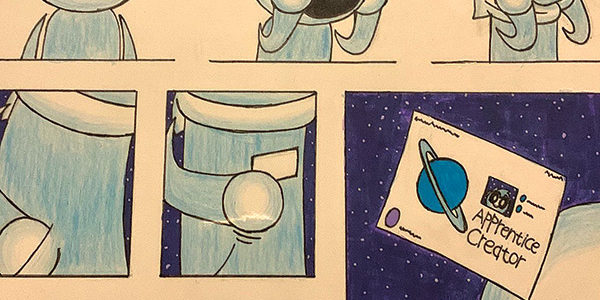 Pencil shavings and ink stains are just a few things that the Zazu Ziners are used to when creating their one-of-a-kind comics in preparation for the 13th annual Richmond Zine Fest.

“We have such a great dynamic, I think. Everyone is so supportive, and everyone is excited for each other,” Eley said.

The group initially formed when David and Kim Eley met through Kim Lepe, the mother to Jakob and Nikolas Lepe. Kim Eley, who had just jump-started her own publishing company, surprised the group with an announcement that they were going to attend the Richmond Zine Fest this year and submit their own collaborative work to sell.

The Richmond Zine Fest takes place Oct. 11 and 12 at the Richmond Public Library. Local comic book artists band together to feature their work to festival-goers, participate in workshops and lend an ear in several panel discussions.

For the first time as a group, the Zazu Ziners collaborated on a group piece named Zazu Anthology.

The piece is made up of six graphic comics, each with a different theme that flows in unison with one another, created in a nine-month period by all six different artists. The titles of each comic are: Bells and Whistles, by Nikolas Lepe; Creator, by Jakob Lepe; A Dream About Mom, by Rebecca Patteson; Eden’s Garden, by Lillie Patteson; Exile, by David Patteson; and Affirmative Action Now, by Henri-Lamar.

The stories range from an outer space being creating a new world – a recollection of a dream one of the creators had – to a ying-yang cartoon duo on an exciting mission. Each comic is created using different tools, whether it’s acrylic paints, color pencils, pens, or a computer program. The group estimates that it will have over 100 copies of their comics at the festival this year.

The group was on a nine-month deadline to create comics. During that time, the team conducted meetings, held each other accountable and tossed around different ideas. “There were so many cool ideas that we were talking about,” Lillie said. “Everyone is so good, I knew we could do it.”

David Patteson, the author and artist of Exile, created his comic based off a curiosity. “I’ve always been interested in religion, and I’ve been trying to understand it. I incorporated direct quotes from Paradise Lost and the Bible.” David said. “It’s an end of the world story, which of course includes Walmart because Walmart is definitely still gonna be there,” he joked.

Jakob Lepe, the 18-year-old artist of Creator, spoke about his struggles trying to decide which idea to go with. “Of course, I can knuckle down and do anything, but I wanted to make sure that I’m doing something that was worth the doing of it, more than my other ideas,” he said.

If interested in learning more about the Zazu Anthology or any of the local artists who contributed to it, check out their website at zazuzine.com.