front933
Things are somewhat new at Defense Supply Center Richmond. The Defense Logistics Agency’s Aviation unit at the military base recently got a new commander... 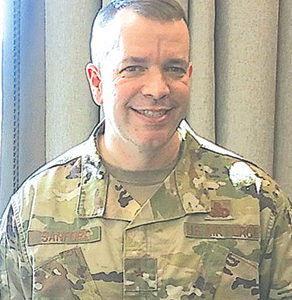 The Defense Logistics Agency’s Aviation unit at the military base recently got a new commander and opened a new five-floor 252,000-square-foot headquarters building.

Air Force Brig. Gen. David Sanford, 47, started as the base commander on July 9. The Atlanta native took time last week to explain some of what goes on at the 611-acre facility, which also houses National Guard and Army Reserve units, a Department of Defense Acquisitions University and a Navy History and Heritage satellite office.

DSCR has around 3,000 employees, including uniformed and civilian, Sanford said. “We’re buying the parts that go into maintaining their weapons systems,” he said, noting that DLA Aviation sources parts from thousands of companies that are primarily from the U.S. A lot of these are small, “mom and pop” businesses, he said, and make milling materials or electronic boards, for example.

“We try to foster a small business community and base,” Sanford said, noting that 23 percent of the products procured by DLA Aviation at the base are from small businesses. The DLA is required to obtain 15 percent, he said.

A logistician by trade, Sanford was trained as an Air Force supply officer before the name was changed in 2001.

“I’m a proud ‘supply chain geek,’” he said, adding that he studies industry best practices from retailers such as Amazon. “We’re a very lean organization and try to maximize taxpayers’ dollars.”

Sanford said commanders at DSCR typically last around two years, and he’s “really proud” to have been picked for the job.

The base – which is accessed by a military gate on Jefferson Davis Highway and a civilian gate off Strathmore Road – began a staggered opening of its new headquarters in June of last year, culminating in a June 25 ribbon-cutting. The $87 million energy-efficient building accommodates some 875 employees, a press release states.

A groundbreaking for an identical operations center building is slated for 2020. That building – which would replace several 1940s and ’50s-era converted warehouses – has a target completion for 2022.