By Joe Short, Josh Mathews and Soren Rutherford Matoaca 55, Meadowbrook 0 Nothing seemed to go wrong for Matoaca on Friday, as the Warriors... 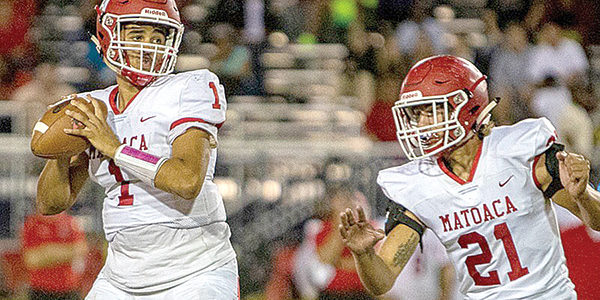 Matoaca 55,
Meadowbrook 0
Nothing seemed to go wrong for Matoaca on Friday, as the Warriors rolled Meadowbrook.

Dreher completed 14 of 18 throws for 246 yards and three touchdowns, and he ran 11 times for 30 yards and two more scores.

Matoaca’s defense remained stout for a second straight week. They did not allow a single first down in the first quarter. Juleon Pointer turned in a team-leading 11 tackles, one of which was for a loss.

Probably the most welcome surprise of the 2019 campaign has been the excellent play of the Warriors’ special teams. Kicker Aidan Redmon went 5 for 5 in extra-point attempts, and the kickoff team did its job keeping Meadowbrook inside the 20-yard line on multiple occasions.

Coach Jay Parker had nothing but praise for his team, but kept an eye on the future.

“We kept working to get to this level, and we are nowhere near done yet. There are still some things we can work on,” he said.

On the other side, Meadowbrook coach Chamont Thompson remains focused after what’s been a tough start to the 2019 season and a rough go during a deep rebuild in his first job as head coach after assisting at both L.C. Bird and Glen Allen.

“We just got to go back to work,” Thompson said. “We’ll watch the film and try to correct our mistakes.”

The Warriors will play their homecoming game this week against Prince George. Meadowbrook (0-4) will search for their first win by traveling to Colonial Heights.

L.C. Bird 20
Midlothian 0
A week removed from picking up their first win over George Wythe, the Skyhawks won again, shutting out Midlothian.

“I am very proud of how our team played against Midlothian,” said L.C. Bird coach Troy Taylor. “Our defense, coached by Matt Bland, has done a great job all year. Seniors Chris Barfield, Tyson Pledger and Quentin Elliott have led our defense.”

Senior Tyler Henderson brought down two interceptions. One of those he took to the house from 78 yards out. Another big play happened when defensive lineman Devin Ford knocked the ball loose deep in Trojans’ territory and sophomore Mike Allen fell on it, resulting in second defensive touchdown.

“Mike [Allen] has come up big in his second year starting,” Taylor said. “He’s only a sophomore, and he’s just getting better.”

Offensively, L.C. Bird fans haven’t seen too many games where passing yards outnumbered those on the ground. Part was due to a performance by quarterback Elliott, who completed 8 of 13 passes for 143 yards and a touchdown. Jordyn Bentley hauled in that 19-yard score.

The running game has had some trouble getting going. They are likely because of inexperience and penalty flags. L.C. Bird graduated its entire offensive line last year. However, improvements have been noted the last two weeks. If healthy, the unit will only get better.

Next week, L.C. Bird will travel to Powhatan. The Indians scored 15 points in the last 5 minutes of a come-from-behind 21-20 victory against Clover Hill last week. Matoaca defeated Powhatan 9-6 in overtime on Sept. 7.

A 14-yard touchdown run by DeAngelo Gray with 2 minutes remaining proved to be the difference.

A staph infection in the locker room affected 17 of Thomas Dale’s players. Running back and Notre Dame commit Chris Tyree missed his first full game with an injury and was seen wearing a walking boot on the sideline. Coach Kevin Tucker said he may miss some more time but is currently “day-to-day.” According to reports, Tyree sprained his ankle in a 21-19 loss to Hermitage on Sept. 13.

Petersburg met Thomas Dale with a spirited performance on defense and special teams.

In the first quarter, the Crimson Wave’s Upton Bailey returned a kickoff 95 yards to give his team a 6-3 lead.

Through the second quarter and beyond, the Knights’ miscues became frequent and eventually hurt them, as Petersburg’s Teon Lewis intercepted a Courtenay Burrell pass and returned it 55 yards for a touchdown.

In the third and fourth quarters, Jasiah Williams and Lamandre Smith both fumbled and Petersburg recovered. Those mistakes helped keep the Crimson Wave in the game, as Petersburg, which was looking for its first victory over Thomas Dale since 1999, cut the Knights’ lead to 26-24 in the fourth quarter.

Gray, who scored the game-winner in the fourth quarter, finished with 90 yards on the ground and two touchdowns on runs of 1 and 14 yards.
Jordan Branch totaled 84 yards rushing.

Williams finished with two touchdowns, a 2-yard run and a 20-year pass from Burrell.

A win is a win, but Tucker wasn’t pleased with his team’s effort and knows it will take more to beat Hopewell, one of the area’s best programs over the last five seasons.

“Our special teams and defense was horrible. We can’t leave any points on the board if we’re going to win next week,” he said.

“We have to get better defensively, knowing our assignments, containing the quarterback, everything,” Tucker said. “[Next week’s opponent] Hopewell will be the fastest team we’ve played to date, and they’re going to have the best athletes.”