Chester couple surprised by discovery of beehive in ceiling

Bees are not something that most people want to get close to. Most kids cry when they see one. Others may scream and run.  But a Chester couple didn’t scream or run when they discovered a beehive above the ceiling in their laundry room.

“When we bought the house in May, we found hundreds of dead bees under the washer-dryer, but didn’t think much of it because the home was very well-maintained and the yard has 50 or so flowering bushes,” said the homeowner who asked to remain anonymous. “But when I saw bees swarming around the eave, I knew we had a problem.” 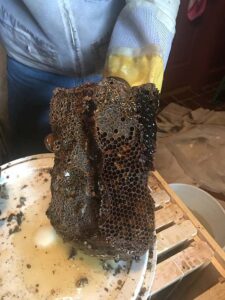 Pictured is a portion of what was retrieved from what beekeeper Joe Oertel called “a solid hive.”

The two did not want to have the bees in their house exterminated because they play a vital role in the ecosystem, so the couple asked friends if they knew anyone who could remove the bees without killing them.

Chester beekeeper Sherry Kelley was recommended, and she enlisted a more experienced bee remover with construction experience, Joe Oertel, to lead the removal because the hive was hidden behind the ceiling.  The Matoaca resident has been keeping bees since 2012, and now he removes bees from wherever they’re not wanted.

Kelley met Oertel during a meeting of the Rockwood Park Backyard Beekeepers Association. The Chester job was their first together taking seven hours to finish the removal.

The most obvious solution would have been to exterminate the insects, but the couple said they didn’t want to kill them because of what they knew about how honey “bee colonies are dying from a combination of decreasing crop diversity, poor beekeeping practices and a loss of habitat according to a report by National Public Radio.

Oertel said he does several cutouts, which is cutting a hole in a wall or ceiling, exposing a hive, removing it, and, in some cases, taking the hive home and starting another brood that could take  a year to redevelop. ”I managed to collect 15 swarms this year,’’ Oertel said. “I gave several of those to new beekeepers. I am a retired contractor who likes the challenge of removing the bees and relocating them instead of destroying them.”

Oertel didn’t start out removing bees from area homes, “As a kid, my grandfather kept bees and used honey as his ‘sweetener,’ since sugar was very expensive. He kept 20 or so hives. So Oertel thought he would give it a try. He said he read whatever he could to learn about beekeeping. Oertel then decided on the type of hive, got it set up in early spring, found someone selling a starter hive (nuks) consisting of five frames of brood, food, and a healthy laying queen and off he went.

After getting his first hives started, he was out tending his little honeys when he was stung at least three times. He hadn’t realized at the time that he was allergic to bees until his rushed trip to Patient First. Oertel returned home with an epinephrine pen for  his allergy to bees. But he didn’t get a bee in his bonnet. He said Bees tend to be docile unless they are provoked. Oertel’s sting experience has made him cautious, but he understands his bees enough to know when they might get angry, and he has a lot of bees that could get angry.

Kelley said she has been stung occasionally,  “it just comes with the job you become immune to stings after a while.” Oertel agreed although he still carries his Epi-pen.

“I try to keep only four to six hives in my apiary (a collection of hives or colonies of bees kept for their honey), but since I catch swarms and do removals, my apiary has ballooned to 15 hives this year,” Oertel said. “Over the summer I’ll re-queen the swarms I caught and those that seem strongest, in the fall, the hives will be prepped for the winter (overwintering) the weaker hives I’ll combine into other hives to gain strength.”

“The rule of thumb for the number of bees in a hive is approximately 40 to 60 thousand. bees per,” Oertel said. “The Chester couple’s removal had maybe 20 thousand due to limited space, but still, a solid hive.”

He said he figures the couple’s hive was three or four years old and would probably yield about 30 pounds of honey.

With the help of Kelley, the hive that was removed from between two rafters in the couple’s attic was about 15 inches wide by 28 inches long by 10 inches thick.

Oretel said the type of honey bees that he keeps are great producing honey bees for most of the country. The Italian bee, Apis mellifera ligustica, is known to be easy to work. They are good honey producers, and they winter well. It was brought to this country in 1859.

“Just like other types of bees, the Italian bee doesn’t sleep,” Oertel said, his own eyes drooping due to a long day of rounding up bees. “Typically in summer bees only live about 30 days and once they’ve emerged from the brood comb they progress through ‘jobs’ as workers in the hive, which include feeding and cleaning larvae, cleaning the hive cells, transferring collected food, building comb, guarding, patrolling, storing and curing pollen.”

Oertel and Kelley used a bee vacuum which has a “trap” inline that allows the bees to be collected with the vacuum and then deposited into a hive body with frames that have a thin layer of beeswax inside the frame. Not many are hurt, and some get away during the removal, although they will die soon without a hive to return to.

“Bees face a very difficult time with the amount of chemicals being used in the landscape market today, as well as farming practices, and the Varroa mite takes its toll. I believe it’s tied to loss of habitat, loss of native plants, spraying for mosquitoes in your yard.  I do see lots of bees around but they are definitely in decline,” Oertel said.

‘It’s the only insect that provides food, honey, and [it]helps produce food through pollination. There is an entire list of foods that would disappear if the bees go, and that’s terrifying,” said Kelley. “They only work for the hive and the plants that they pollinate.”