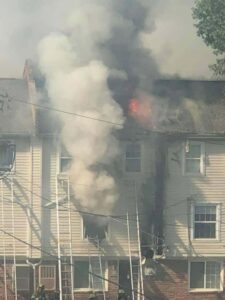 Sirens screamed that firefighters were on the way and residents quickly evacuated the apartment building in the 12600 block of Ben Fry Drive after fire erupted there Oct. 6.

“No one was injured,” said Lt. Kenny Mitchell of Chesterfield Fire & EMS.

Firefighters were called to the complex at 2:30 p.m. and they saw heavy smoke and flames as they arrived.

Mitchell said the one apartment building was affected. Fire spread on the outside,going up the building to the attic.

Seven adults and seven children were displaced. The Red Cross is assisting them.