Delmer Farmer, known to his loved ones as Buck, is the oldest of six children. In his case, that means a lot: Farmer will turn 100 on Jan. 3, 2021. Although the lockdown makes a birthday celebration uncertain, Farmer is sure “there will be some type of celebration.”

The soon-to-be-centenarian is no stranger to being celebrated. In October, he received a two-star note. “It was a personal note from Maj. Gen. Rodney Fogg,” Farmer explained, “on behalf of the Army, thanking me for my service, stateside and in Europe.” Fogg also wished Farmer a happy 100th birthday, albeit a few months early.

Farmer, says his greatest accomplishments are “a long and lasting marriage, working and supporting my family, and having a long and comfortable life.” In addition to having built three houses during his lifetime, He was inducted into the Army on Oct. 1, 1942, not long after his Feb. 9, 1942, wedding to his wife, Agnes. 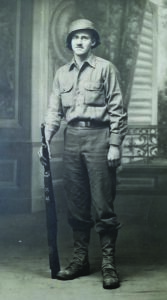 The pair has been married for 78 years, and the two renewed their vows on their 75th wedding anniversary. Farmer said they conducted the renewing of their vows “with a church wedding and reception that we didn’t have when we were married.”

During his time in the Army, Farmer served as a wheeled vehicle mechanic. “I repaired jeeps, half-tracks, M4 tractors and the weapons carriers that towed the anti-aircraft artillery guns—basically kept the vehicles going,” he said.

In addition to learning practical skills, Farmer said, “I learned to be dedicated to the job I was performing. I learned resilience, respect and good work practices.”

Despite the valuable lessons his time in the Army would teach him, Farmer wasn’t enthusiastic about leaving for war when the time came. “I didn’t want to leave because I had just gotten married and was thinking of settling down and starting a family.,” he said. “I didn’t want to leave my family.” Still, he cherishes some fond memories of his time in Europe. He recalls “the dances in England.” Less fondly, he recounts “the constant air attacks in France and dodging bullets from the enemy aircraft.”

While dodging bullets was a harrowing experience, Farmer said the most challenging aspect of the war was being away from the family he hadn’t wanted to leave in the first place, in addition to “riding on the Queen Elizabeth across the ocean and really just surviving day to day.”

When he was finally able to return home, Farmer said, “No one recognized me. I had been gone for two years, and I was so thin, they didn’t know who I was.” None of this quashed his excitement to be home. To this day, Farmer said, “I am living on the same family land that I grew up on and am always close to family.”

Thinking back on the last 100 years, Farmer said he looks back the most fondly on the birth of his two children and “watching our family continue to grow. As for what I look forward to, it’s pretty much one day at a time now. I am looking forward to getting to be 100.” Regarding his hopes for his family and their future, Farmer said, “I hope I have provided a good example for them and they will follow in my footsteps for the kind of life I have been able to have.”

The war Farmer said, made him appreciate the freedoms people have today. He said, “I would say that my best advice would be to work together and stay united.”