Brooke Kistner loves building relationships with students, especially those in middle school. Kistner remembers how awkward, stubborn and out of place she felt as a middle schooler and said it is rewarding to be a support for students in the same boat. 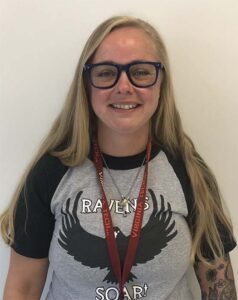 “I was never one of the popular kids in school; in fact, I was extremely quiet and preferred to go unnoticed,” Kistner said. “So to be that teacher who purposely notices students to build a relationship so that they know they are loved, valued and needed is priceless.”

Kistner has been teaching since 2008 and is currently in her fifth year at Elizabeth Davis Middle School. She has taught eighth grade for all five years, but started collaborating with the English Language Learner (ELL) program last year. Before Elizabeth Davis, Kistner taught at Petersburg High, where she taught ninth to 11th grade.

“Both Davis and Petersburg have taught me a lot about teaching and I have learned a lot from the students and colleagues,” Kistner said. “After I graduated from college, I actually worked as an instructional aid at the elementary level, [which]I enjoyed … but I have really enjoyed the middle school years.”

Kistner has always worked with children and when her older brother, to whom she looks up to, started teaching, she said it seemed logical to pursue teaching to be like him. She became involved with the schools in Blacksburg during her junior and senior years of college and fell in love with the community and environment created in the school building.

Kistner isn’t a fan of long lectures and fears she can’t sit still well, so she said she makes sure to not do that to her students. Kistner and her students are always on the move in her classroom. She said ELL students strive to provide as many opportunities for speaking and natural interactions as possible.

“We try to create an environment where all students feel comfortable speaking and working with their peers,” Kistner said. “We understand that each student learns differently, so we try to cater our teaching style to each learner in the room, [but]we have found that movement speaks the language of most students.”

During her second year at Petersburg High, Kistner volunteered to coach the boys’ track and field and girls’ cross country teams since it was another opportunity to meet more students and help them develop their talents. When she started working at Elizabeth Davis, there was an opening for a track and cross country coach. She is now also the school’s athletic director.

Kistner was announced as Teacher of the Year in the spring, and she praised her colleagues for their support.

“I cannot brag enough about how awesome the community at Davis is, and although the limelight makes me extremely nervous, it is nice to be recognized by such an awesome group of people,” Kistner said. “I also have to give a lot of credit to my co- teachers, as we work all day together.”

Kistner’s main goal as a teacher is to get to know each student she comes in contact with and she said she loves being in the classroom too much to go elsewhere.

“In 20 years, I see myself still in a classroom trying to be as hip and cool as the middle schools or high schoolers that I teach,” Kistner said. “Because I enjoy being in the classroom so much, I’m not sure that administration is my calling. I’m not even sure what retirement is.”