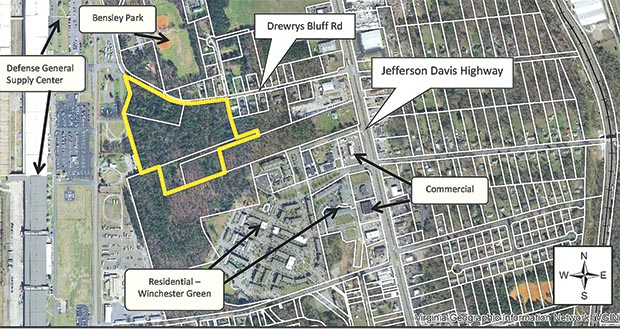 scroll448
164 income-restricted housing units targeted for 2022 The Chesterfield Planning Commission unanimously recommended approval for an expansion of the Winchester Green development on Dec. 17. ...

The Chesterfield Planning Commission unanimously recommended approval for an expansion of the Winchester Green development on Dec. 17.

The developer, John Bolton, requested a rezoning from R-7 to R-MF for 164 multi-family housing units. He plans to build 1, 2 and 3-bedroom apartments. Sixty percent would be 2-bedrooms with no more than 20 percent each of the remainder.

Bermuda District Commissioner Gib Sloan said the county had been working with the developer for about a year on the project.

According to planning documents, construction would begin in the spring of 2021 and be finished by the summer of 2022.

Jefferson Davis Association member Renee Eldred said the Winchester Green development has been going on 25 years. An environmental easement would separate the expansion from the older portion, a planning document states.

Traffic from the development could generate up to 900 trips per day. According to planning documents, the development is in a revitalization area and no cash proffers for road improvements would be accepted per county policy.

The apartments would be income-based housing. Each unit would include a washer and dryer. The development would include two playground areas and a 750-square-foot indoor activity area.

Wetlands are on the property and would need to be avoided.

In the 1960s and early 1970s, waste material from maintenance and operations were disposed of at Defense Supply Center Richmond, which resulted in contamination of soil, sediment and groundwater, the staff report states. Remedial efforts are ongoing to clean up the documented contamination.

Over the past year, the developer conducted groundwater sampling and monitoring for the presence of contaminants that DSCR is actively remediating. The sampling results showed that concentrations of the contaminants are below the method detection limits, according to the staff report.

The developer agreed to provide a 100-foot vegetative buffer along the west side of the property.